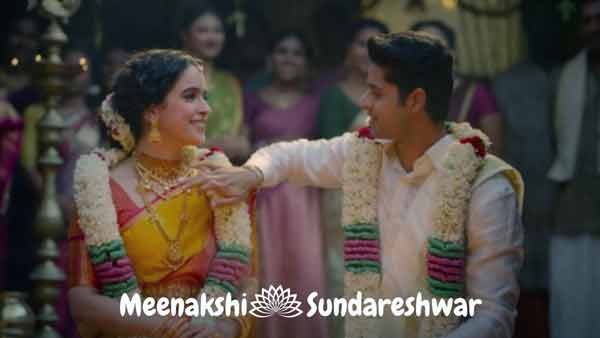 While we know that the actors portray those characters perfectly and fit the role, you might be sceptical about how the actors will make you believe in a beloved romantic comedy. Vivek Soni's Meenakshi Sundareswarar stars Sanya Malhotra as (Meenakshi), Abhimanyu Dassani as (Sundareshwar), Shiv Kumar Subramaniam as (Thatha), Nivedita Bhargava as (Rukmani Aththai), Purnendu Bhattacharya as (Mani), Komal Chhabria as (Suhasini), Manoj Mani Mathew as (Vaman), Archana Iyer as (Poojitha), Ritika Shrotri as (Mukai), Kalp Shah as (Rasu), Saurabh Sharma as (Tutor), Mahesh Pillai as (Ganapathy), Sonali Sachdev as (Samruddhi), Varun Rao as (Ananthan), Suresh Arora as (Senthil), Chetan Sharma as (Sai Kumar) and Khuman Nongyai as (Diganta). 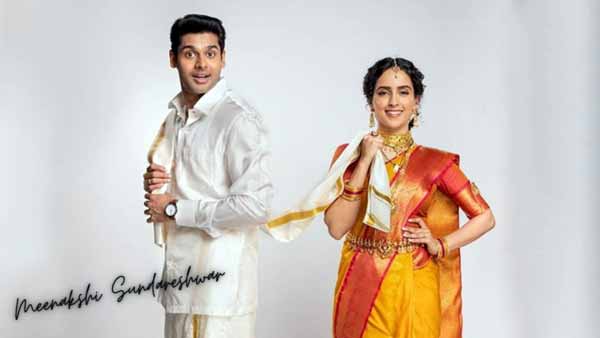 Review: We have seen actor Abhimanyu Dassani Ji in the romantic and comedy film Aankh Micholi, Nikamma. The actress Sanya Malhotra must have seen in the Hindi film Shakuntala Devi Pagglait, which has released a few days ago.

The film starts from Madurai Sri Meenakshi Sundareshwara Temple (Goddess Parvati) also refers to the historic temple in South India. Sundareshwar (Abhimanyu) and Meenakshi (Sanya), whose parents are seeking a suitable match for them.

Sundareshwar and his parents are on their way to choosing a suitable girl for him, but they wind up at Meenakshi's house owing to a misunderstanding. When they realise their error, her Thatha/grandfather (Shivkumar Subramaniam) draws comparisons with Lord Shiva and Goddess Parvati, claiming that this may be their destiny, although they don't appear to have much in common until the previous scene. For example, she enjoys movies and attends 'Superstar Rajinikanth's new release's first-day first show, but he dislikes movies and they put him to sleep.

Soon after Meenakshi and Sundareshwar's wedding, he hears about a job interview the next day. Sundar's opportunity leads him to Bangalore, but he couldn't bring his newlywed wife with him so he can focus on growing his profession, as this break comes a year after completing his engineering studies.

Sundar's move from Madurai to Bangalore sets in motion his long-distance marriage with Meenakshi. As with any long-distance relationship, this newlywed couple experiences more downs than ups – the pleasure and laughter they enjoy at first gradually changes to sorrow and heartbreak.

Vivek Soni, who also co-wrote the film with Arash Vora, chose a topic like this, about long-distance relationships, and how the protagonists enjoy the few ups while dealing with the many downs. However, it appears that they took the 'far' distance between the pair a little too literally, as seen by the film's duration.

The plot lags at times, and you wonder when it will get to the next point. After a while, it appears like the creators were in a rush to resolve the issue and find a solution before time ran out. Ananthan (Varun Shashi Rao), an old acquaintance (or boyfriend) of Meenakshi, has a track that builds slowly and steadily but ends abruptly and fast.

Sanya Malhotra does a very good job of essaying the different colours of Meenakshi and is a joy to watch for the way she performs her scenes. This is Abhimanyu’s (Mard Ko Dard Nahi Hota, Aankh Micholi, Nikamma) the bright young talented actor seems to be making an interesting choice of roles and films. He keeps his Sundar subtle and effective, never departing from it. The sincere performances, the two contribute to the chemistry between their characters.